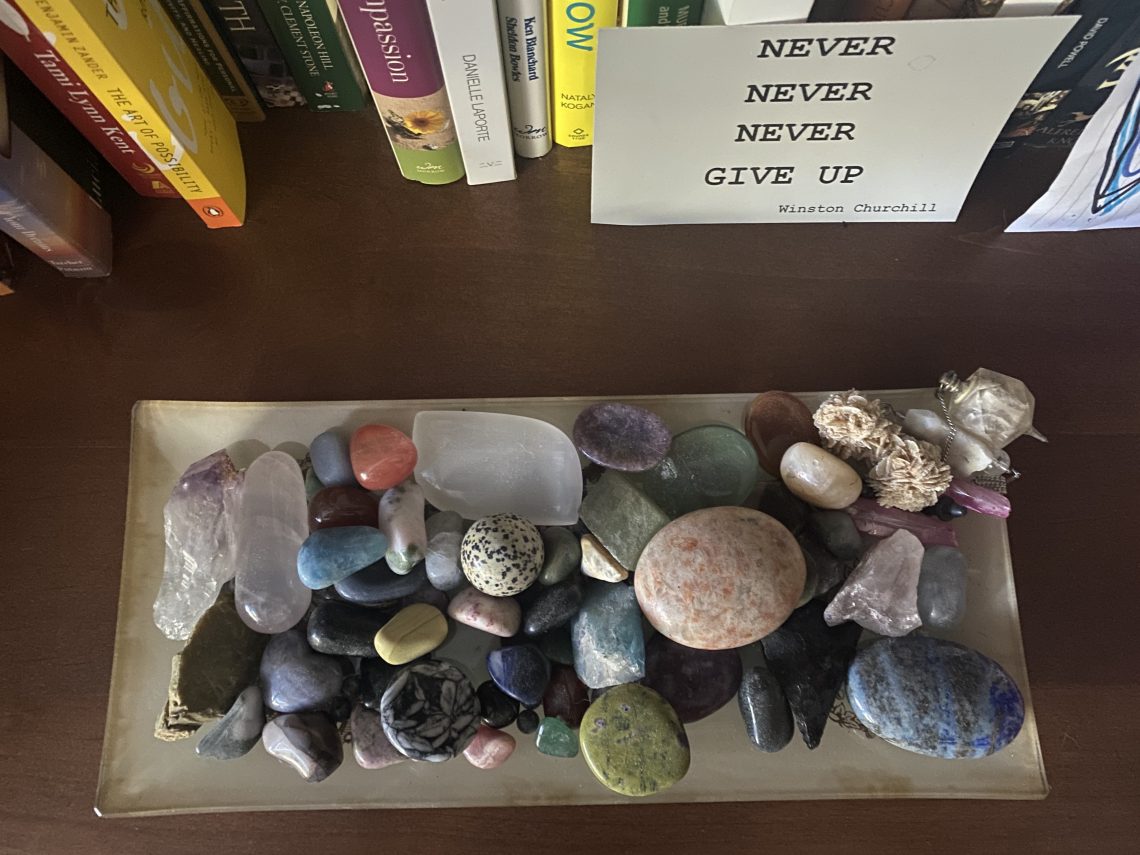 I like crystals. I think they’re pretty, enjoy collecting them, and learning about their “properties.” I’m curious. Chief is skeptical.

Sometimes I give them to him when he’s feeling super stressed or things are overwhelming, even for an optimist like him. He’s type A and he hides his stress and overwhelm very well. He also gives everyone the benefit of the doubt except for himself. He’s a man with a calm exterior but I’m pretty sure there’s a mosh pit inside him. A few years ago, in an effort to help as well as lighten him up, I went out looking for specific crystals to gift him. I even went as far as to make him put one in his lab coat pocket “for protection,” you know. Negative energy and all that. 😁He humors me and it’s a joke between the two of us. Winner-winner because I like jokes and laughter.

Unfortunately, the past weeks have been very busy and overwhelming so jokes are falling flat around here. One day this week, Chief called to say he wasn’t starting a case until 6:30 pm and he had cases after that. I told him he needed one of my “rocks” as he likes to call them.

After a few minutes of quick catch-up, our conversation goes something like this:

Me: “Well, maybe you should meditate. Do you have time to do a quick meditation?”

Me: Pause. “Sounds like a job for one of my rocks. Do you still have one in your lab coat?”

Chief: Chuckles. “You’re probably right.” Totally humoring me. “I do.” He sounds so tired. He’s not his usual energetic and rushed self.

Me: “Well, put it in your hot little hand and hold it. It’ll make you feel more grounded.” Because, you know–I have to get his goat just a little and who knows, maybe it’ll work? 🤷🏻‍♀️

Only he knows if he’s feeling ungrounded or not. What I do know is he needs something to take his mind off his never-ending to-do/see/be list. That man is all over the place, doing all the things. I’m thinking he needs a touchstone to get out of his head for a few seconds, more if he can swing it.

Me: “But here’s the thing: squeeze it in your hand but resist the urge to throw it at anyone. K?”

Chief (who never do anything like that): Chuckles. “Okay.”