From the back seat of the SUV I hear word that an imaginary rhinoceros drives better than me (said rhino is a “friend” of Ephali, the elephant hand puppet who’s a lovey).  Little Man’s reasoning?–the rhino has a horn and tail and can do more things with them, like text.  Where he came up with this–I don’t know.  I have neither the desire nor the dexterity for that kind of nonsense.

Thanks to these two, I may be developing a little complex… 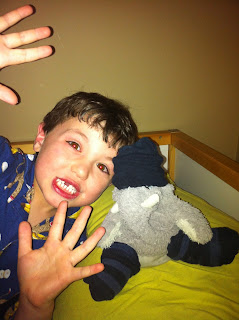 Of course one of them is wearing socks on his feet and his head…oh, yeah, and he’s not real!  Or is he?

As a side note, Big Monkey defended my driving.  He said that I’d win a driving contest (contests are big in our house–but only if you’re male).  Little Man countered with, “And where are we going to find a little animal to drive a truck?!”  He seemed a little indignant, as if Big Monkey had said the stupidist thing he had ever heard.