I’ve always joked that I was the star in my own B horror film. The one where the protagonist has been telling everyone there’s danger afoot or disaster’s on its way but no one will listen. Can you picture it? The black & white film depicting a woman standing in the middle of the screen, screaming for help, eyes bulging, bent arms tucked in tightly at her sides while her hands move to the sides of her face, claw-like–camera pans to where her gaze is fixed, to show the horror that only she sees & understands? Yup, story of my life. I say something & I get poo-pooed about my silliness or exaggeration (I’m sure you’re prone to agree after that last bit) and then, it comes true! The horror. I suppose mostly horror just for me because often others have select memories. They forget that I mentioned it in the first place. In any case, I had a different kind of B horror movie experience last Friday–in an elevator, no less! Yes–the twist was that I was the horrible monster.

When I get in the elevator at work (I usually take the stairs; but, sometimes, in the morning, juggling heavy, heavy bags & coffee & the elevator always waiting–no real excuse–but, I take it) I always get asked, “3?” sometimes I get, “…4?” immediately thereafter. Admin is on 3 & another institution is on 4. That morning I chuckled and said to the woman, No, 2. For some reason I get that a lot. I’d like to think that it’s because I look like a person who wouldn’t take the elevator to the 2nd floor (shameful, I know–at least she was going to the 2nd floor, as well). In reality, I probably look like someone in admin. I don’t look like a student. Eyeing me, she asked if I’m a student or a teacher. I said teacher. Looking at me full-on she asks, “Fashion Design?” I laugh & tell her no, English. Yes, here’s where the horror comes in. The look on her face was priceless–she looked at me as if she were trapped in the elevator with some sort of flesh-eating space creature (to stick with the 50s B horror movie theme). I laughed. She mumbled something–because many kids her age seem to mumble or maybe I’m just getting old & don’t hear very well anymore–and then says, “I wish you were my English teacher. I hate my English teacher.” Wow. I then became the lesser of two evils–of the “I voted for him because I really didn’t want the other one to win” variety. Just kidding; actually, it was simultaneously odd & sad. She sounded so dejected by the thought of her English teacher that I felt bad for her. These students really don’t like their general education classes & those of us who teach them are pretty much horrors to them (or so I’m told). At any rate, her reaction to me being an English teacher still makes me chuckle & the look on her face was too much. I thought she was going to jump out of her skin. I’ve had people look at me in a lot of different ways, but that one was entirely new to me. As I tell my students, you learn something every day, right? 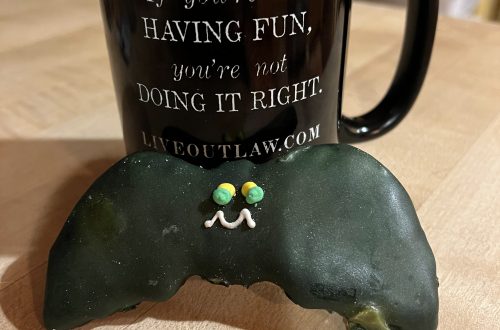