When I checked in this morning I noticed that all of the blogs I had listed as “following” had disappeared.  Momentary gasp!  Oh, well, I thought.  I can fix that, anyway there are some that need to be purged.  Later in the day I tried to post.  I had pics, an actual story and then I didn’t.  I went to post and “Poof!” it, too, disappeared.  Time to pick up children.  I get in the car and what is playing?  Cruel Summer, by Bananarama.  The irony wasn’t lost on me, especially since I felt like I spent most of last week ranting about the heat and how I was “done” with the summer.  Since then, my followed blogs have reappeared and the children are in bed–no more pop-up appearances and heroic efforts to wrangle more time away from their beds and keep themselves away from much-needed sleep.  We’ll see how this works for me, which it did if you are now reading this.

Soon, Starbucks–a place (ahem) I frequently visit–will be serving up their delicious Pumpkin Spice Lattes.  For me that signals fall (I use that term loosely around here) is just around the corner, which is extremely exciting for me.  It’s my favorite season, even if it’s almost an apparition here.  While it’s still hotter than the hubs of Hell during most days, the mornings and evenings are winding down and there is an end to sight.  Here’s a shot representing my love of (addiction to) Starbucks: 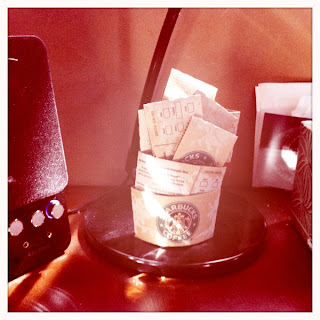 ﻿Keep in mind that these represent some of the visits I had recently made–I usually try to get my coffee without a sleeve.  I won’t say anything to the baristas, but it’s really irritating when I’m served a lukewarm coffee with a sleeve–what’s the point?  Seriously.  I’ve only said something once–and that was when the milk was nearly cold and I wasn’t able to head right home to heat it up.  I even hesitated then because I don’t like to make a ruckus about stuff like that.  I made Chief taste it before I took it back–he’s the one who said it was pretty gross and that I should say something and he’s usually quieter than I am about stuff like that.  When I finally made myself go back, I got the what for from the barista and how it was prepared to some exact temperature, blah, blah, blah.  After he was done with his indignant rant I told him I wasn’t doubting him but I just need the poor drink “reheated or something.”  I politely asked him to feel the cup or just stick his finger in my drink because it was not even lukewarm–boy, was he embarassed when he realized I wasn’t being a pill and that it was pretty darn cold for a hot drink!  Sadly, I had to listen to his preparation method, again.  I told him it was alright and I wasn’t upset but if he could just make it warmer that would be great and I would really appreciate it.  It was great–I got my hot drink while still remaining calm in the face of that storm.  It will soon be great because Pumpkin Spice will return and so will the cooler weather and beloved sweaters and scarves.  I may even get this to post.  Fancy that!
Good times.
Give me a shoutout! 🤠