Sometimes I wonder if it’s bad that when I’m done with something, I’m done.  I decide that I no longer want anything to do with it and I will ignore what ever “it” is or just let it expire, as in all my yoga cards.
I’m so into yoga.  I enjoy practicing and it makes me feel physically and mentally well—but there are some other things about yoga, such as the posturing (not the poses themselves, some people’s attitudes!) and elitism that I could live without.  That is another rant–I  mean–post.  Currently, I have cards at 3 different places and they all expire within pretty close proximity of each other.  I hurt my knee this summer and the boys have had wacky camp/home/vacation schedules so that I haven’t been able to sustain a regular practice.  I haven’t disciplined myself to create a home practice, either.   So here I am—flexible in body and inflexible in practice.  I haven’t been to yoga for a long while (month) and it’ll feel like “starting over” because of this knee issue and my general couch potato-ness—and, now, I’m just done.
I’ve had time to go this week as the tick, tick, tick of the clock marches towards expiration dates.  Have I gone?  No.  Why?  Not sure, plenty of excuses and ailments—some real, some not.  I go through phases with this kind of behavior.  Gung ho to accomplish, do or sustain something and then the screeching halt of my brakes stopping me—oftentimes for no good reason.  I throw myself under the proverbial bus.  That’s bad because I usually like to reserve that kind of blame for my family—ha, ha, they won’t think that’s so funny but I had to add it.
Do you ever have those kinds of moments/days/weeks/months?
Time for me to invoke Ganesh, remover of obstacles, because the kids go back to school on Monday and I’ll have no excuses!  In case you’re wondering, I’m my own obstacle…
﻿ 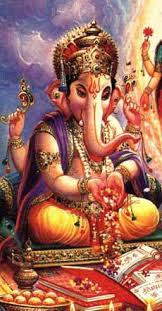 crystalinks.com  via google images
If I don’t go back to yoga soon, I may end up looking a little roundy like Ganesh, too.  No offense, Ganesh!
﻿
Give me a shoutout! 🤠