No, this isn’t the usual lame ploy to pretend that it isn’t a bazillion degrees outside or a poor excuse for a summer sale.  It’s kind of how I motivated my boys to dig through their stuff and see it with new eyes.
The allure of summer had been wearing off—the boys have been out of school since a week before Memorial Day.  The older one was begging for a new notebook (apparently the ones with a couple of pages written in them are considered “done”) and the younger piped in saying that he needed a new activity book.  “Need” is such a subjective term.  There are a lot of activities books hiding in our house and I bet there are quite a few notebooks cohabitating with them.  Their pleas were met with a very firm NO.  I love art/school/office supplies like crazy but I have set some limits, too.  I told them to open drawers, look on the shelves and go on a treasure hunt—you’d be surprised at what you’ll find.  I also told them that they could probably do that every day for quite a while and it would feel like Christmas every time, because they have so much stuff they’d forgotten about.  “You’ll see it with new eyes,” I tried to convince them.  When met with sceptical looks, I threw my arms in the air with a loud, “Surprise–it’s Christmas!” to try to sweeten the deal.
The same advice could apply to me and my horrific handbag and jewelry habit (hello, Nordstrom Anniversary sale I’m talking to you), but that is for another time.  Seriously, I said another time!  I didn’t think they paid much attention to what I had said, but a few days later I found little man holding an activity book.  He came up to me and said, “Look what I got for Christmas!  It’s Christmas everyday!”  Clearly, he was excited and so was I.  Score one for me because they are often a little too quick for my tricks.  Score one for them for trying it out.  So, we’ve been revisiting old toys, Lego sets and games and steering clear of new purchases, for the time being.
Merry Christmas—may you find something “old” and see it with new eyes. 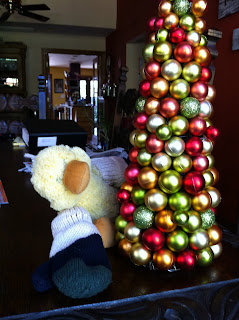