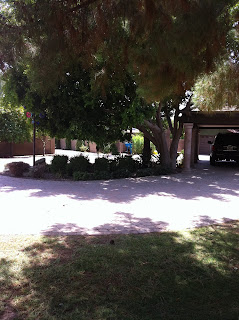 We all think that we are good drivers. I know a couple of people who will fess up to being bad drivers, but they are in the minority. Then there was the time that my friend’s husband took her car to get an alignment and the mechanic asked what in the world he had done to the car—the husband’s response was, this is my wife’s car and she is pregnant; she said she hit the curb turning—don’t ask, she’s pregnant. She doesn’t really remember exactly what she did to the car, either. All she knew was it was really out of whack. There you have it.

In Phoenix (but more so Scottsdale) there seems to be this unwritten rule that people who have dents in their cars are somehow “bad” or “uninsured” and are to be steered clear of at all possible costs. This is really a new car kind of town and it seems a lot of people are leasing these days so that they can always have a new car. OK, fine. My Mini’s eight years old and I don’t really want to part with it. This is despite the fact that I’ve had to put a lot of work into it of late. Unfortunately, this is the first summer that I decided I should probably tote the boys around in the SUV because the a/c isn’t so great in the Mini’s back seat and we’ve had some really hot days. It doesn’t help my cause that they are so vocal about the heat, too. It’s a little awkward switching between one of the smaller cars on the market to one of the larger cars on the market (Infiniti QX56). My friends like to tease me about it as do the parents at the boys’ schools.

I admit—I’m one of those people who’d like to think she’s a good driver (I did a ladies day at the track and I did pretty well and went another time at a different track with my husband—as an aside, had a great time, learned a lot, you should try it). The SUV lives in the carport which has a pretty clear “you should enter here and exit there” kind of set-up, even with its circular drive. The a/c units are in the way coming from the “exit” side if you try to enter in that direction, which is exactly what I did today…do you see where this is heading? We’ve had workers at the house and they generally park willy-nilly. Our driveway from the street is a long, straight stretch and the area near the house is circular, leading to the carport, and then there’s a short straightaway off the long stretch/circular part leading to the garage. The driveway by the house is wide enough to fit two large trucks side by side—we had it built that way on purpose. It’s so no one gets trapped and there isn’t the big car shuffle. Did I mention that it’s the width of two trucks? I’m perfectly capable of tucking the SUV in via the exit—this involves a lot of adjusting, it’s too tight to do it in one or two goes. But for some reason this morning I tried to squeeze in a little more distance before I had to back up and adjust, scraping the side of the bumper on the wall. It’s a pretty decent sized scrape and the truck is black to boot. Obviously, I am now ranked with those alleged “bad” drivers and “uninsured” (although I assure you we have plenty of insurance). It didn’t help that the worker saw the end result of my driver’s ego-tragedy and then laughed at me. Fortunately, he’s an odd man with a funny sense of humor and I think he’s ok. But—really—I’m not a bad driver…really.