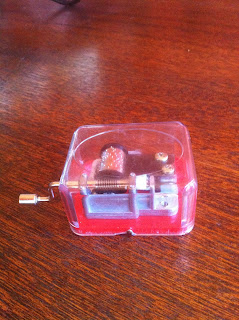 The fairy shopkeeper, aka magical shopkeeper, gave little man a music box that plays row, row, row your boat.  It’s a little red-bottomed box with a clear top that has a tiny crank to play the music.  She has a pile of these she gives to the “littles.”  She’s so good with children.  Fairy shopkeeper and little man seem to be on the same wave length–it’s very cute to watch them interact.
Fairy shopkeeper told little man that she likes to have hers by her bed and when she plays her music box it makes her smile.  Little man dutifully went home and put his new music box by his bed and every night for a long while after receiving this gift he’d play it before he went to bed.  One night he reminded me that he needed to play it after I turned out the light and was leaving.
As with many toys it was set aside, seemingly forgotten…but not so!  It hadn’t been played for a few weeks but just as I was in need of some soothing from the extremely rough summer days filled with energy-riddled children and occasional arguing from all parties involved I would hear the magical music box playing from the playroom like the magic harp from Jack in the Beanstalk.  Just like the giant I would feel my body relax and a smile would cross my face at the thought of sweet little man (not angry, indignant or hollering little man but loving, kind and gentle little man) playing his magical music box right before bedtime.  He’s done this the past couple of nights and it’s as if he really knows that mom needs some serious help because she seems to have run out of her own resources come bedtime.  The music seems to start the reset button in a more official way and washes away the hot summer dust that wants to corrode my sanity.  Or maybe he needs the magical music as much as I do.
Give me a shoutout! 🤠