If I only had a brain hat, like Stella here, I would’ve found my shadow pics yesterday. 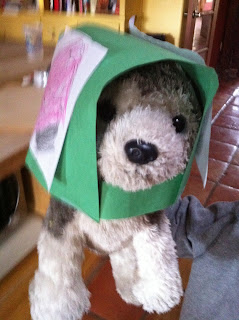 That’s a picture of a brain that Little Man colored for school last year and then the class made “hats” out of them–they were studying anatomy.  In case you’re wondering, Stella is a “boy.”  There’ll be a post about Stella in the future.

So, here’s the real deal–my dog’s shadow.  Did you figure out what made robot dog’s shadow yesterday?  It was a bike carrier on the back of a car.  The boys actually saw that shadow and told me to take a pic, because I take a pic of practically everything. 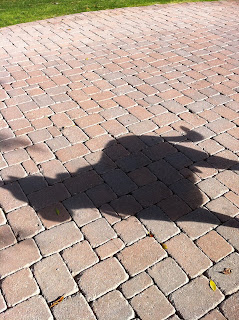 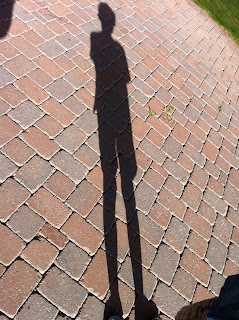 This is Big Monkey’s shadow.  Yes, he really is skinny and tall.

As I was pulling out of the carport this afternoon, I noticed that all of the birds were standing in the shade.  They weren’t chattering or eating, just standing.  Our yard, especially in the evening, sounds like a scene from The Birds–lots of bird chatter, chirping and squawking.  It was eerily silent today and I attribute it to the death-heat.﻿  Even though I promised to lay off the heat grumbling, I felt compelled to add that observation.  It was kind of like driving down a busy road when there is no traffic–eerie, not normal and mildly apocalypic.
Give me a shoutout! 🤠