Since Buddy’s been gone, the cats have “moved into” our yard.  They stroll, run, hunt, snoop, frolick.  There is barely any urgency to vacate when they see us, whereas before they were just a blurr of color.  That’s because Buddy has caught more than his fair share of cats, much to my dismay.  I have to admit that while I’m an animal lover, cats are not at the top of my list.  Probably because I’m severely allergic to them.  Despite that, there have been some cats that I’ve formed great attachments to.

When we first moved into our current home, our realtor said to us, “Oh, by the way…the house comes with a cat.”  Wha-what?!  No, no, no!  That can’t be!  NO!  Allegedly a “stray” that the family took to feeding.  Jon and I just looked at each other.  I’m thinking they didn’t want to bring it along on their next house flip.  We’ll never know, but we decided she was a girl–very cute, black and white cat, with a nearly silent meow.

Our house sat empty for a few months while we tried to sell our other one.  We’d go and work on it in the evenings and slowly move small items in.  One night I was in the kitchen doing something and I felt like I was being watched.  I looked through the french doors and there she was, silent meow and all.  We eye-locked but she wasn’t leaving.  I called Jon from the other room and very sympathetically exclaimed, “Look!  We have to feed her.  She’s expecting it.”  We stood there looking at the pitiful face peering back at us and agreed–we had to go the store and get cat food right now.  Yup, she wrapped us around her proverbial little finger from the get go.  We went out to see if she’d come to us, which was no problem whatsoever.  Jon picked her up and she loved it.  Yes, a quick trip to the store was in order.  Jinger named her “Mrs. B” after Mrs. Beasley and the name stuck.  That cat hung around through our first dog, Dutchess, and for the first year or so of Buddy and Trigger.  Then we didn’t see her again.  Of course that made me sad.  I wondered about her for a long, long time.

Mrs. B and Dutchess had a little arrangement–they didn’t bother each other.  We fed Mrs. B on the potting table and Dutchess wandered around the yard unperturbed by the little black cat.  In the winter they would simultaneously lay against either side of one of the kitchen doors (Mrs. B on the outside and Dutchess inside).  It looked like they were snuggling, only they had the door between them.  Made me chuckle.  Then it made me think of the 50s and 60s sitcoms where the husband and wife slept in separate beds (a little stream of consciousness for you).

Mrs. B wasn’t as fortunate with Buddy and Trigger–they did not have an arrangement.  We had to feed her on the roof.  This displeased Mrs. B and me, but what can you do?  I became very accustomed to her presence after Dutchess died.  That cat even wandered into our house a couple of times when the door was open (when we were between dogs).  She didn’t stay, but she came right up to me to say “hi.”  (Which, coincidentally is when Jon said to me, “You’re getting way too used to that cat.  I think it’s time we get another dog.”)  Why, that cat even brought me a mouse once and a lizard another time (much to my dismay and delight).  You know, “She likes me!  She really, really likes me!”  She could very well have been someone else’s cat who spent a lot of time at our house, but when she started bringing me “offerings” or “gifts” I wasn’t so sure.  Perhaps I told myself this to “justify” my attachement to an animal I allegedly “dislike.”

It’s been years since Mrs. B lived here.  However, I think we might have a “fill-in” cat for her.  A beautfiful calico has been hanging around here and he doesn’t really run away from us.  He’s very curious and when we first noticed him he’d go to different doors and meow.  The other day he came right up to the kitchen door and peered in–just like Mrs. B did.  Crazy.  I squatted down and peered back at him.  Stuart did the same  but then he moved towards the door and the cat ran away.  I’ll keep you posted on cat watch.  I hate to admit it, but it makes me a little happy to have a friendly feline visitor.  At first, I was really concerned with the “alarming” number of cats using our yard as a byway.  I think I counted about five.  I thought they were feral, which means more cats to come…I mentioned this to someone who told me if they don’t run away they aren’t feral.  O.K.  I think this cat is someone’s pet because he has such a healthy and beautiful coat and he’s friendly and curious.  I also could be telling myself stories, too. 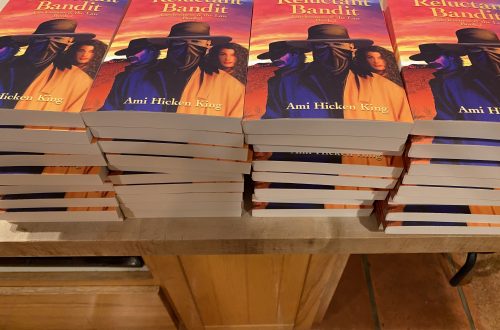