We’re in a “heat advisory” here in Phoenix and it really stinks.  The school is even keeping the children inside because it’s too hot to play.  Since I’m a little fried, here is a shadow pic to entertain you.  Since I can be technically challenged and can’t seem to find the others, you only get one today.  But, you get a bonus “one” backstory below.

Can you guess what this is a shadow of?  What do you think it looks like? 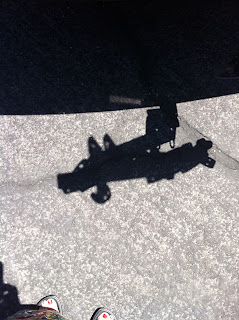 ﻿The boys thought it looked like a robot dog.  I agree with them.  But right now it also looks like a bat or a gargoyle of sorts, too.  I took that earlier in the month.
The backstory of the day is about Chief and Big Monkey, when he was about 1 year old.  In the car I always give the boys snacks in little bags or containers and let them handle them on their own.  Chief is a little neatnic about his cars, so usually the boys do not eat in them when he’s around.  But, when Big Monkey was little he grew like crazy and seemed to be constantly hungry, so Chief did feed him snacks while running errands.  However, he’d dole them out one-by-one.  Apparently Big Monkey tired very quickly of that and insisted he have “mo” (more).  Chief responds with, “No, one.”  Big Monkey firmly says, “Two.”  So, we learned two things that day.  1) No one likes Chief’s control-freak car anticks (although we love him anyway).  2) Big Monkey could count.
﻿
Give me a shoutout! 🤠