I collect Pyrrha wax seal pendants http://www.pyrrha.com/.  They are beautiful pieces infused with meaning and symbolism, which I love, and they come with explanatory cards printed on lovely paper.  I wear them like a gypsy–sometimes a lot at one time. 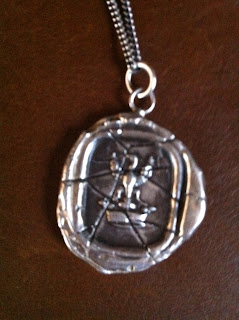 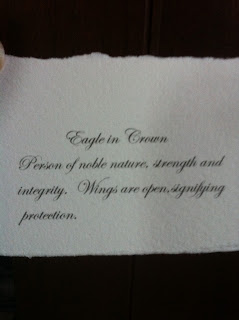 This one is an eagle but at first glance can look like a p.  It didn’t occur to me until someone said something.  Usually a phoenix is depicted with a greater wing span with more depth–this eagle’s wings look more like the muscle man at the circus when I think about it just now.  At any rate, I wore it to a kid’s birthday party once and this mom came running over to look at it.  “I love this!  Is it a phoenix?” she says to me simultaneously manhandling it, and nearly me, to get a closer look.  The closer look didn’t really help her because even after I told her it was an eagle and told her a little about it she still kept calling it a p.  At one point she might have eyed me suspiciously.  It was hard to tell because her face was so close to mine.  Finally, I just let it go—I mean really let it go.  I had already agreed, “Yes, it does look like it could be a ,” but on and on she went.  I think she was convinced that because we live in Phoenix this pendant had to be a phoenix or that I was some big fan of our city or something (There are a few cars/trucks running around here with a huge phoenix symbol on their back windows, very similar to the city logo, I just don’t happen to be one of those people–no, they aren’t official city vehicles, either; it’s kind of like those people who have a Cutlass and then feel the need to put a giant sticker across the top of the windshield that says, Cutlass.).  I don’t know–after a bit I just wanted her to back away.  There was no use doing a circle jerk with her and by now her observations of my necklace and her close proximity to my face had become similar to a hug from a non-romantically linked male that has lasted a little too long.  This is coming from a person who’s ok with a little closeness and gives hugs freely.
I really believe in the truth and not misinforming people, but sometimes it just doesn’t pay to repeat the truth.  Either the person is going to accept it or not.  You’d be over the pain quicker if you just poked yourself in the eye and quit while you’re ahead than to go round with someone deaf to what you are telling them.
Despite all that and those who won’t listen, still believe in the truth.  It’s good for your soul.  Just don’t bother repeating it to those who won’t listen.
Give me a shoutout! 🤠