Yesterday
I picked up an old girlfriend, her daughter and her daughter’s friends at the airport.  They are loving the heat as they just came from chilly .  We were talking vacations past and about rides we won’t do as parents and my friend said that she did the Tower of Terror (at Disneyland) and won’t be doing it again.  I said I’d never do it and I don’t like to say “never” a whole lot because I don’t like eating crow.  With that said, I can pretty safely say that’s one ride I just won’t do.  I don’t like drops or roller coasters any more.  Somewhere I crossed some sort of line and I don’t feel obligated to go back.  Seriously, you couldn’t beg me enough—won’t do it.  At any rate, I was telling them that my husband, Chief, took Big Monkey on The Tower of Terror when he was 4.  They couldn’t believe it (although we all agreed he is a tall kid, always has been, and meets some of the height requirements earlier than might be expected) and so I told them I have a picture Big M drew after we came back—it’s of the .  I then gave pause and said aloud—that really sounds like something that came out of a therapy session, doesn’t it?  I couldn’t believe that Chief took him and I can’t believe that Big Monkey to this day acts like it was cool and he wants to do it, again.  If he does, it just won’t be with me.
I still have this hanging in my workspace–this was a time of ripe imagination for him as well as creative pictures and art.  Although this picture does kind of say “therapy session” in its bleakness but then again what can one really remember whilst “dropping” from the top of a building to the bottom? 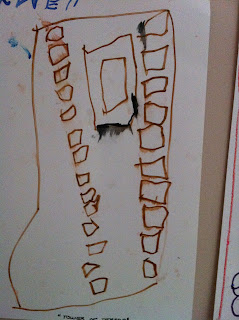