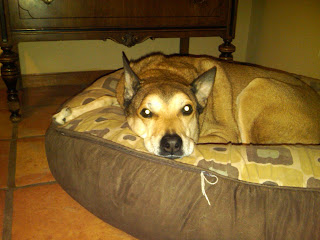 Our family loves dogs.  We tell stories about dogs.  We sing and talk to our dogs.  We love seeing other people’s dogs—you get the idea.  We are getting ready to go visit the grandparents, both sides, and were talking about how long it would take if we drove.  The conversation moved on to how we could reduce the driving time if everyone took a turn—including the 5 & 7 year old and eventually the dog.  Yes, the boys decided that grandma would think it was very funny if Buddy drove to her house—then were cracking themselves up holding imaginary steering wheels and making the backing up beeping sound that some vehicles make.  This all happened while we were driving.  I’m sure that Buddy would also think that he’s a good driver, no, make that a stupendous driver because that’s the kind of dog he is (remember, most everyone thinks they are good drivers…).  I’m sure he’d be a focused driver because he’s a focused dog—until he saw a cat, then all hell would break loose.  There would probably be some curb hopping and sidewalk driving and definitely a lot of swerving and driving into oncoming traffic.  So, when the boys asked if I thought grandma would think it was funny all I could think of was “horrific.”  Big monkey must’ve read my mind because he said “horrific” aloud just as I was thinking it.  Although you have to admit the thought of a dog driving is a little funny.

This was our dog, Trigger, who didn’t like to go in the car.  He liked it in theory but not as much in reality: 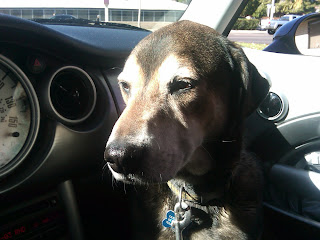 Poor guy is post-op coming back from a check, so he’s looking even less thrilled.  Plus, he’s in the Mini because the vet didn’t want him jumping into the SUV.  My husband and I used to joke about Buddy & Trigger driving places and here I was having a similar conversation with the boys–although they started it.