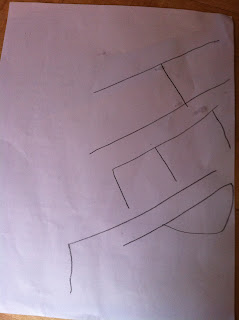 I’ve been simultaneously entertaining and making myself crazy with yoga class card “games.”  I have a couple of cards from different studios that are expiring around the same time and I am running out of time to use them.  I was a yoga class slacker this summer and went sporadically because of summer camp schedules as well as general apathy on my part.  I’ve been calling this current frenzy to use up my class cards a number of things: yoga class card bingo and wheel of yoga are my two current favorites.  I have to tell myself and my friends, “No, sorry I can’t go then–yoga bingo says that I must go to class at 10:15.  I can go after that.”  To my husband I say, “Are you going to be around this afternoon?  I need to play the wheel–of–yoga!”  I find my game playing completely entertaining and think myself clever and funny, but it’s also allowing me to avoid expressing what a lame position I’ve put myself in.  All this joking around about these cards that I should’ve used long ago (especially the one because I had an entire year to use it!) masks my anxiety over going to so many studios.  Why is this such a problem?

I’m a loyalist at heart.  I love the teachers I have at the different studios and I am currently finding it difficult choosing a studio.  Going to just one would be the economical (and loyal) thing to do–I try to go 5x a week, so if I buy an unlimited it really reduces the price.  For a long time I was both unable and unwilling to go to my beloved studio.  I say unwilling because of my all-or-nothing attitude–I wanted to go 5x a week and could only make 2 of the classes while the boys were in school.  Sadly, I chose not to go at all instead of being moderate and sensible, going to the classes I could actually attend.  Then, the Groupon gods started introducing all of these yoga studios I never would have tried before.  I probably wouldn’t have gone to these studios looking at their offerings, but the deals were so exceptional and I could actually make classes at least 5x a week that I had to try them.  If I only went to a couple of classes, that alone would pay for the Groupon itself.  If I didn’t like the studio or the yoga style there was no harm–I tried something new and wasn’t really out of pocket.  I used this approach with two new studios as a kind of trial and then really enjoyed them (I went to studio #2 for nearly a year before trying studio #3–I tried studio #3 because studio #2 was becoming a little stale–my regular classes became rote–and had some weird politics going on).

As I mentioned, I wanted to go to only one studio to save myself some stress and anxiety and I’ve realized during this yoga bingo card blitz that I might not be able to because what these 3 studios offer is all very different.  Going back to studios #1 and #2 I realized how much I really do love both places.  All 3 are good in their own ways and I benefit for different reasons.  I’ve also formed enriching connections/friendships at all 3 places.  Everyone is working something different on me.  Before, I might’ve found that to be distressing.  Right now, I find it to be good.  It’s the ambivalence in my head and all the crazy stories I’ve concocted that’s not so good.  I was really making myself crazy because I felt like I was “cheating” on the different studios by hopping around.
Initially, I wanted to share my stupidity and gem of humor about yoga classes and then found myself waxing philosophical about shaking up my practice with different studios and teachers for the good of my body and to keep my brain on its proverbial toes.  If I could only let go of the guilt I tend to carry with me…

About the pic–I found that sheet of paper on the backpack bench in our foyer the other day.  Big Monkey wrote that on the back of some class worksheet.  I wonder what that’s all about?

Maybe we both need to step outside of our heads.